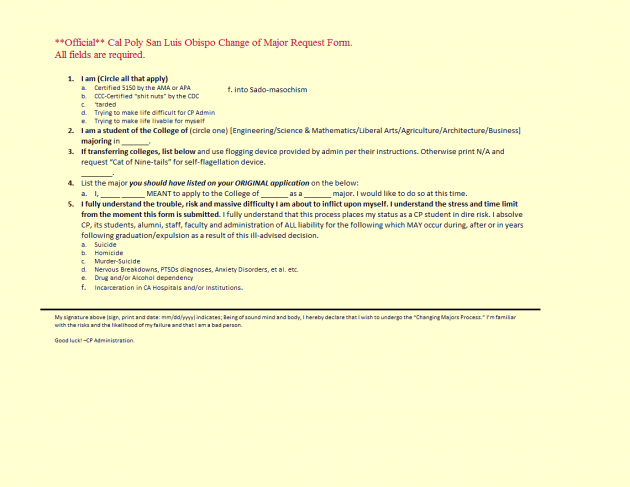 A recent search query was shot thru Google …the user was clearly concerned about her child’s decision to change majors at Cal Poly San Luis Obispo. Tapper7.com was once again located organically.
As part of a larger project, I’ve written at devastating length and excruciating detail about my life at Cal Poly and Cal Poly itself. I’ve written quite a bit about CHANGING MAJORS at Poly, WHY it is so difficult and why the policy of forcing applicants to declare a major defies logic and is counter-productive.
Point: The initial reason to make changing majors difficult was to prevent an aggie (an Agriculture Student from using his enrolled status to side-step the excruciatingly meticulous process by which Engineering and Architecture students are selected). For instance; dep. on your location, an SAT score of 1000 and a 3.0 GPA with zero extra-curricular activities, zero volunteer work, zero AP classes and no membership in extracurricular clubs, sports, activities or events WOULD QUALIFY for an applicant for The Cal Poly San Luis Obispo College of Agriculture. Perhaps not an acceptance, but certainly a qualify.
This same application to the College of Engineering has a Keyword-binary search algorithm that would keep admissions from even being able to see it, but for arguments sake: